Transport difficulties in the 60s

Nowadays, I seem to get distant memories triggered by an innocent conversation. This was evident when I was talking with my wife, on what is available nowadays, and what happened in the sixties, with regard to disability access to transport.

I agree that hangover prejudices from earlier decades, and sheer pig–ignorance seem to have been at the root of many of the recent reported articles that have reached the Supreme Court, or indeed the many,  I would assume,  that do not get reported.

In that respect, disabled people seem more determined to find out about transport to a destination, whereas maybe able –bodied folk do not appreciate the bus or train quite so much, and prefer the car.  This thinking arose in particular because, in a  Metropolitan area of England, I was aware of my son–in -law’s 14 year old daughter’s inability or unwillingness, to travel to another town  about 12 miles away.  So in order to accommodate her, he has to take time of work to get her to this appointment. Now this may seem extreme, but is actually another talking–point about parenting, safety and being green in our daily lives.

When I was about 10/11 I broke my ankle at Judo.  The nearest plaster room was at Glasgow Royal Infirmary, which either required a bus ride from Airdrie, Lanarkshire to Glasgow Buchanan Street, or a “Blue Train” to Glasgow High Street, and then a fair walk to the GRI A&E.

My mother, who had Polio, could not walk those distances and she did not have her three –wheeler at the time.

Neither could I walk those distances with a broken ankle, nor can I remember if an ambulance was used to get me there.  I only ever seem to remember hopping along in the street, with my mother and I supporting each other. Family circumstances were such that no one was available to escort me except my mother.

It was a fair walk or hobble for my mother to the bus stop nearest our house, but it could drop us a bit nearer GRI, and then there was a downhill walk for a bit.  However, it was the stepped access to the bus that usually flummoxed my mother.  The time taken to embark as she struggled on board the bus usually caused the same annoyance to passengers and conductor that still happens today.  If she had gone by train she would have had to get the goods lift from the platform up to High St, and then catch a bus a few hundred yards to the GRI.

Suitably plastered, and with walking heel and crutches, we struggled back to the bus station.

Every subsequent visit for nearly a year after to replace the plaster, or get an x–ray etc, I had to do the 12 mile journey on my own. No mobiles, no phone just my fare and money for ‘something to eat’ over my loaf wrapper piece.

Dependent on the timings it was either the bus or train.  Remember this an 11 year old, which to me was not remarkable then, or indeed now. Except that nowadays maybe we assume that life is more perilous than it actually is.

Maybe because of my Mother’s disability, then doing things oneself and taking the initiative for her, was a powerful influence on my life.

It is indeed a different world nowadays. Or is it?  The same difficulties for an “at home” disabled mother apply.

Nowadays it might be easier to just ring or call a friend for help with transport.  I think we knew about one person who actually owned a car.Which is why the three–wheeler was such a revelation 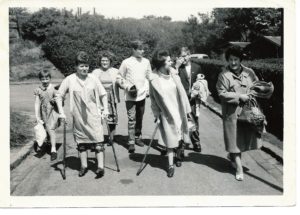 This entry was posted in Memories and tagged memories, Transport. Bookmark the permalink.